about The Cricket Society Trust

For over half a century the Cricket Society has had a charitable arm.

In the early days it concerned itself with providing cricket equipment to organisations across the world where the game was in its infancy in that particular location. It was decided to formulate a Charitable Trust, which was independent from the Cricket Society but retaining strong links with its members. In December 1992 formal Charity Status was approved.
Would you like to ask a question?

The Cricket Society Trust has been helping young people to participate in cricket since 1992.  The programmes we currently support include the MCC Foundation’s Cricket Hub for State School Girls at Felsted, the Arundel Castle Cricket Foundation’s programmes to enable disadvantaged young people to participate in sports, education and recreation and the Fred Trueman Schools Cricket League.

The Trust was created as a separate charitable trust from the Society’s Welfare Fund and so there has always been a close connection between the Trust and the Society.  The current Society Executive and the Trustees of the Trust are working to develop this connection further with a number of new initiatives including the holding of joint meetings at the Union Jack Club and the sale (masterminded by the indefatigable Andrew Cashmore-Till) of a range of Trust Christmas cards.  The lunch in the Long Room at Lord’s planned for 28 November 2021, principally in aid of the MCC Foundation, is another important development for the Trust.

What follows is a brief summary of the development of the Trust.

The origin of the Trust was the Welfare Fund founded in 1957 as a subsidiary activity of the Cricket Society.  The Welfare Fund was re-constituted in 1986 as a separate entity controlling its own funds under the governance of a special sub-committee. In the early days the Welfare Fund concerned itself with providing cricket equipment to organisations across the world where the game was in its infancy.  The Executive Committee of the Society and the sub-committee of the Welfare Fund agreed to mark the forty fifth anniversary of the foundation of the Society by the creation of a charitable trust, which was independent from the Cricket Society but retaining strong links with its members. In December 1992 the Trust was registered by the Charity Commission as charity number 1017194.

The first Trustees were Christopher Box-Grainger, Eric Budd, Peter Byrne, David Alsop and Ken Merchant all of whom were highly significant in the development of the Society and the Trust.   Ken Merchant, in particular, played a huge role in the administration of the Trust until shortly before his death from Covid in 2020 and together with John Ellis was key to the Trust’s longstanding partnership with the Arundel Castle Cricket Foundation which is described in more detail below.  Subsequent Trustees have included other members of the Society Executive such as former chairman of the Society Bill Allen, Lyn Thomas and current chair of the Trustees Ronald Paterson.  Other notable Trustees have included former chairman Alan Porter who has a great track record of organising cricket matches for special schools in Lincolnshire.  The current Trustees are Bill Allen, treasurer Jeff Barnes, chair Ronald Paterson and Geoff Hastings, who has been involved in junior cricket for thirty years and was the founder, with Fred Trueman, of the Fred Trueman Schools Cricket League.  The current president of the Cricket Society Trust is Isabelle Duncan who commentates on cricket mainly for BBC Radio and other media outlets. A playing member of MCC, she spent six years on the Main Committee of MCC and is the author of “Skirting the Boundary – a History of Women’s Cricket”.

Throughout its history the Trust has provided financial support for the Arundel Castle Cricket Foundation’s coaching programme for special needs children.  Hundreds of youngsters have benefitted from coaching at the indoor school at Arundel.  Funds from the Cricket Society Trust and other organisations are used to enable children with special needs from a range of predominantly inner city schools and organisations to visit Arundel for coaching.  For many of the young people whose visit to Arundel is funded by the Cricket Society Trust this will be their first trip away from their local environment.

John Barclay, President of the Cricket Society and until recently Director of Cricket at the Arundel Castle Cricket Foundation, wrote in 2017:

“I am as proud of our Special Needs Projects, and all we do for the disabled too, as any of the initiatives we have embarked on in over 30 years.  Spurred on by wonderful support, not only from Ken Merchant and The Cricket Society Trust but also the bountiful generosity of a number of charitable trusts and other individuals, we now set aside some 50 days each year dedicated purely to those for whom life is a real struggle and so in need of a boost.  We do just that. Above all we show kindness, “the golden chain by which society is bound”, by doing small things, little gestures, which make a big difference – the economy of grace I believe”

In return, Arundel has supported the Trust by hosting 2 fundraising events for the Trust.  In 2005 a match between the Cricket Society XI and a team raised by the then Cricket Society President Christopher Martin-Jenkins successfully raised funds for the Cricket Society Trust and the Arundel Castle Cricket Foundation  On that occasion, the Society XI was well beaten by strong opposition including CMJ himself, his sons James and Robin, then a regular member of the Sussex team, Angus Fraser and Sky television’s Charles Colville.  Robin Martin-Jenkins put in a strong all round performance and won the player of the match award.  In 2014 the Society XI played again at Arundel in a memorial match for Christopher Martin-Jenkins.  Robin Martin-Jenkins, by then teaching and coaching at Hurstpierpoint after retiring from playing for Sussex, again delivered a masterclass in putting the Society’s bowlers to the sword and the Society XI were again defeated, this time by a team also including Isabelle Duncan and Sussex’s Alexia Walker, capped 3 times for England Women.

Since 2018 the Cricket Society Trust has supported the MCC Foundation’s Felsted Hub for state school girls.  The Felsted Hub is one of 38 Hubs established by the MCC Foundation across the UK, providing free, professional coaching to talented athletes from state secondary schools and coaching Hub participants to attain a high standard of playing, encouraging them to join local cricket clubs and mentoring them into County and District squads.  Training is a mix of drills and game-based learning with girls being given advice on what they can do outside of the sessions to improve. In 2021 the Felsted Hub reached the Girls’ semi-finals of the MCC Foundation’s first ever National Hub Competition at Harrow School, narrowly missing out on going through to the final at Lord’s.

The Cricket Society Trust also supports the Fred Trueman Schools League which was established in 2005 by the late Fred Trueman and our trustee Geoff Hastings to help State Schools play competitive cricket. It is also supported by the MCC Foundation and the ECB.  Schools across Huntingdonshire, Peterborough, Cambridgeshire, West Norfolk, Northamptonshire, Leicestershire and South Lincolnshire are invited to take part in competitive leagues at Under 13 and Under 15 level and plans are well in hand for the League for 2022 after the disruption caused by COVID 19.

As with every charity, fund raising is vital and in recent years the major fund raising events for the Trust have involved speaker meetings with former England cricketers hosted by global law firm Eversheds Sutherland and organised by Isabelle Duncan and Geoff Hastings. All of our speakers at these events have given us wonderful value.  In the first of these David Gower submitted to a very entertaining interview by Isabelle Duncan.  We had envisaged the same format for David Steele who made the proposed interview format redundant by talking entertainingly and informatively for more than an hour and a half in response to Izzy’s first question and then stayed afterwards to answer questions from the audience.  Geoff Miller spoke wonderfully well, answered frankly and openly a number of questions about his days as an England selector and conducted an impromptu auction of a bat signed by Joe Root and a framed picture of cricket cartoons.

Enormous thanks are due to all Society members who have supported the Cricket Society Trust in the past and we hope you will do so in future by coming to our lunch in the Long Room on 28 November 2021, buying our Christmas cards and supporting our joint meetings with the Society.  Thank you again!

You can donate on line – with Gift Aid – please visit our fund raising page.

The role of the Trustees is to organise events and functions which will raise funds. This is done through Dinners, Lunches, Receptions, Prize Draws, Cricket Matches or any other means whereby money can be raised effectively and efficiently.

Trustees meet regularly to organise the distribution of funds in accordance with the Constitution of The Trust. 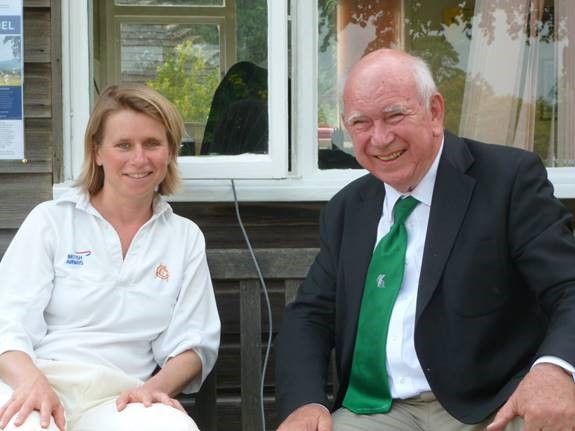 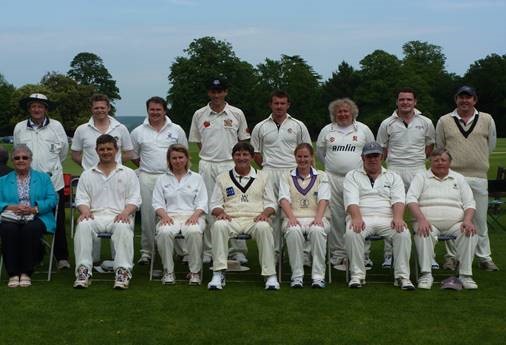 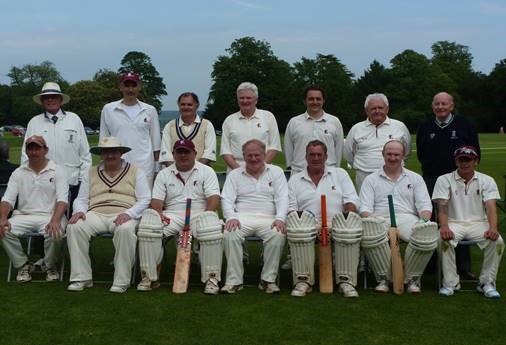 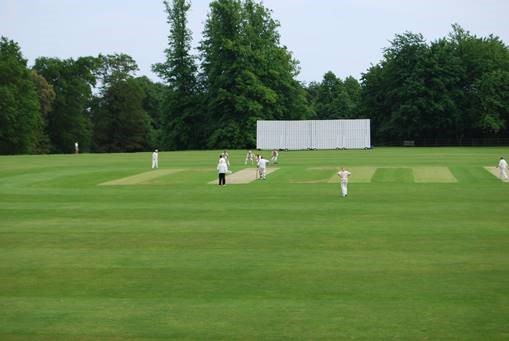 Cricket - a game for everyone to love, participate in and enjoy!