The recent Cricket Society Trust evening in London was very enjoyable. I hope it was successful for the Trust. We were welcomed with drinks, canapes and good conversation amongst attendees. Then Geoff Miller entertained us, relating many experiences of his cricket following and playing days. These ranged from the 10 year old Geoff finding his father listening to the Ashes in the early morning in a “two up two down in Chesterfield”, through his tours as an England schoolboy (with the headteacher ensuring he remained a “schoolboy” long enough), to his retirement as a player.

There were of course many anecdotes entertainingly told but the talk was also impressive for its structure. It was a lesson to anyone speaking about anything. The flow and feeling behind much of it was impressive and the regular return to the “two up two down in Chesterfield” helped remind one of the overall story. For those such as me who had not heard Geoff before the evening was a treat, and clearly it was for others too. Questions could have gone on all night but several people had travelled considerable distances to be there. The questions were mainly about Geoff’s days as an England selector, his replies thoughtful and very amusing; all entertaining for us oldies and clearly to those much younger attendees.
In support of the Trust Geoff acted as auctioneer and sold a bat signed by Joe Root and a framed picture of cricket cartoons.

Thanks to Eversheds and in particular to Ronald for the evening in pleasant and comfortable surroundings. Except for these events I have had little contact with the Trust but have enjoyed all three evenings I have been to.
The Trust always welcomes donations and continues its work through cricket. Look out for next year’s event and put it in your diary!

An entertaining evening with David Steele

Held at Eversheds Sutherlands City of London office on Monday 12th November from 6.30pm to 9.00pm.

We also organised a successful Grand Christmas Raffle in 2016. 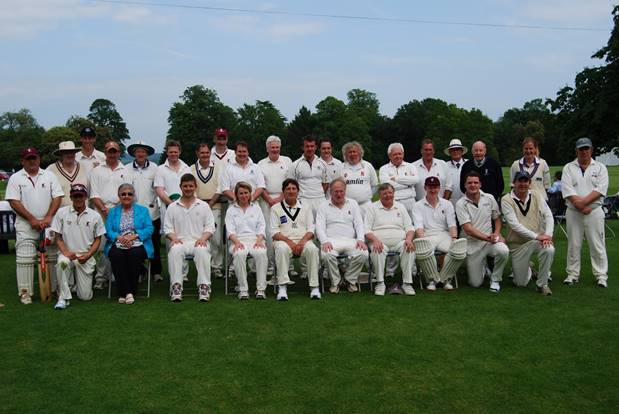 The Trustees would like to thank all those cricket lovers who joined them for a unique fund raising Lunch at the historic Broadhalfpenny Down ground, Hambledon. The meal provided by the well known Bat and Ball Inn on the boundary edge of the ground was excellent and enjoyed by all.

Unfortunately, the wet weather after Lunch restricted the time available to watch the game between the local side Broadhalfpenny Brigands and the RNVR.
The good news is that The Trust made over £1000 from the event