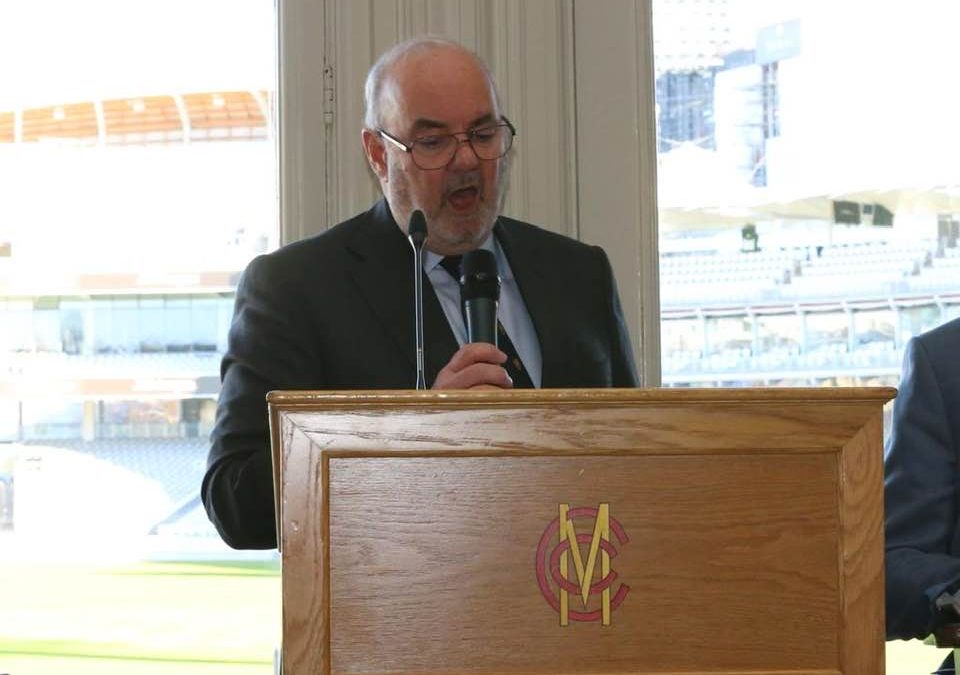 The Lunch at Lords Event on the 28th of November was a huge success, with over £22,500 raised.

Below is our Chairman’s introduction and a summary. I hope you enjoyed the event, if you attended and thank you again for a year of support for our wonderful Trust.

Thank you all for being here today to support the Cricket Society Trust and our work with the MCC Foundation.  We could not do this without you.  I hope that you enjoyed the Exhibition of the Evolution of Women’s Cricket.  Before I hand over to Roger Dakin to continue today’s entertainment I just want to take 2 or 3 minutes to thank some of the people whose work has made today possible and to tell you a bit about the cause you have kindly come to Lord’s to help.

It is a great thrill to be here in the Long Room at Lord’s, one of the world’s great venues, with the President and Chair of MCC, Clare Connor and Bruce Carnegie-Brown – thank you both for allowing us to be here today and for joining us.   You will be hearing more from Clare later.  Thank you also to Sarah Fane, Director of the MCC Foundation, for making this event possible – you will also be hearing from Sarah later – and thanks to Daniel James and the rest of the MCC team for all your work in advance and today.  I must also say huge thanks to Izzy Duncan, President of the Cricket Society Trust, and my co-Trustees Geoff Hastings, Bill Allen and Jeff Barnes for all your work on this event.

Those of you who know me will know that cricket, the enjoyment of watching and playing and the friendships that come with cricket, have been a huge part of my life.  I have been very lucky in this respect.  I learned to play cricket when I was 5 and I have been playing cricket ever since.  I was educated at, or at least I went to, a school where cricket was a big deal and the importance of Lord’s and the MCC was relentlessly promoted by my first cricket master Jack Mendl who had played for the club on a tour of Canada in 1946 and did his shopping in Edinburgh on a Saturday in a full MCC touring blazer with a St George and the Dragon badge and egg and bacon piping. I was lucky enough to be taught both the skills of cricket and, equally important, how to play in a team and how you support the rest of your team. I was also incredibly lucky that my sister Jane was seemingly willing to spend hours bowling to me in our back garden. As a schoolboy I was sent to Easter coaching classes in the old sheds at the Nursery End here.  I first walked into this wonderful room as a member of MCC in 1976 during the England/West Indies Test Match and it is a great thrill to have one of the England players in that match, and a great hero of mine, David Steele, here today on Table 1. And 45 years later I am still playing cricket with my delightful team mates from the Cricket Society XI here on Table 8.

Now the point of all of this, the point of today, is it was easy for me to become involved in cricket and everything that it has brought me; easy in the sense that I really just had to take advantage of the opportunities that were in front of me.  The Cricket Society Trust, which I became involved in under my wonderful predecessor as Chair, Alan Porter here on Table 1, and the late and much missed Ken Merchant and others, raises funds to support programmes which help young people who don’t have the same easy opportunities to learn and play cricket.  Throughout its entire life the Cricket Society Trust has supported the Arundel Castle Cricket Foundation’s programme for special needs children. We also support the Fred Trueman Schools Cricket League, which Geoff Hastings will be happy to tell you more about.  Since 2018 we have supported the MCC Foundation’s training hub for state school girls at Felsted School, which provides professional coaching to talented female athletes from state schools, coaching them to attain high standards of play, encouraging them to join local cricket cubs and mentoring them in county and district squads.  I am sure Sarah will tell you more about that. We are raising funds today primarily to develop our partnership with the MCC Foundation in relation to training hubs for girls.  Thank you all for being here today and I hope that you are feeling generous.

A summary of what the event achieved 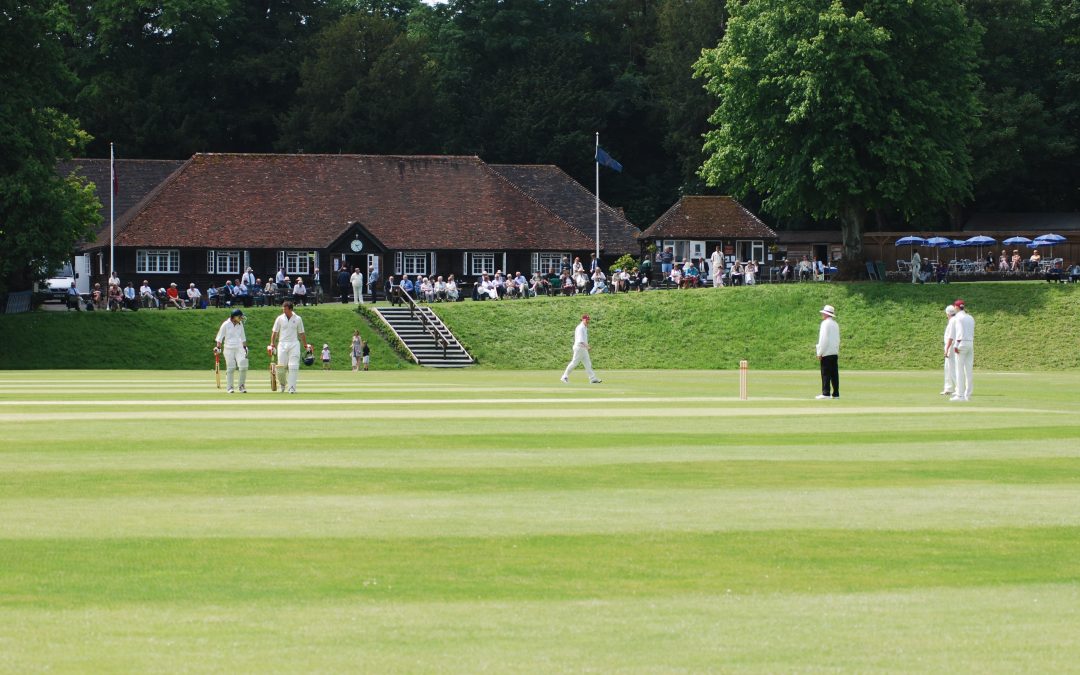 The Cricket Society Trust has arranged an event in aid of the MCC Foundation on Sunday 28th November 2021 from 11am.

We have a form to allow you to apply for tickets for our ‘Lunch at the Lords’ event, and would love to hear from you if you’d like to book.

The itinerary for the day is:

At 11.30 am there will be a viewing of the Evolution of Women’s Cricket Exhibition in the Lord’s Museum

1 pm Lunch will be served with entertainment

Roger Dakin our MC will host a live auction, heads & tails and raffle. A silent auction will be available, offering bespoke experiences and unique items.

We will hear from Sarah Fane, Director of the MCC Foundation and Ronald Paterson, Chairman of the Cricket Society Trust

All in all, it will be a very engaging day, and tickets are limited, so please download the form here and book yours now!

The Cricket Society Trust is pleased to announce a lunch to take place in the Long Room at Lord’s on Sunday 28 November 2021, principally in aid of the MCC Foundation.

The theme of the lunch will be women’s cricket with speakers, a star-studded Q&A panel, auction, raffle and a tour of the Evolution of Women’s Cricket Exhibition currently in the Lord’s Museum. Confirmed speakers include Clare Connor, President of MCC and Managing Director of Women’s Cricket for the England and Wales Cricket Board and Cricket Society Trust President Isabelle Duncan, author of Skirting the Boundary: A History of Women’s Cricket.

Demand for tickets is expecting to be high so please email Mr Patterson to register for this event so that you can receive the application form as soon as it is available.

The recent Cricket Society Trust evening in London was very enjoyable. I hope it was successful for the Trust. We were welcomed with drinks, canapes and good conversation amongst attendees. Then Geoff Miller entertained us, relating many experiences of his cricket following and playing days. These ranged from the 10 year old Geoff finding his father listening to the Ashes in the early morning in a “two up two down in Chesterfield”, through his tours as an England schoolboy (with the headteacher ensuring he remained a “schoolboy” long enough), to his retirement as a player.

There were of course many anecdotes entertainingly told but the talk was also impressive for its structure. It was a lesson to anyone speaking about anything. The flow and feeling behind much of it was impressive and the regular return to the “two up two down in Chesterfield” helped remind one of the overall story. For those such as me who had not heard Geoff before the evening was a treat, and clearly it was for others too. Questions could have gone on all night but several people had travelled considerable distances to be there. The questions were mainly about Geoff’s days as an England selector, his replies thoughtful and very amusing; all entertaining for us oldies and clearly to those much younger attendees.
In support of the Trust Geoff acted as auctioneer and sold a bat signed by Joe Root and a framed picture of cricket cartoons.

Thanks to Eversheds and in particular to Ronald for the evening in pleasant and comfortable surroundings. Except for these events I have had little contact with the Trust but have enjoyed all three evenings I have been to.
The Trust always welcomes donations and continues its work through cricket. Look out for next year’s event and put it in your diary!

An entertaining evening with David Steele

Held at Eversheds Sutherlands City of London office on Monday 12th November from 6.30pm to 9.00pm.